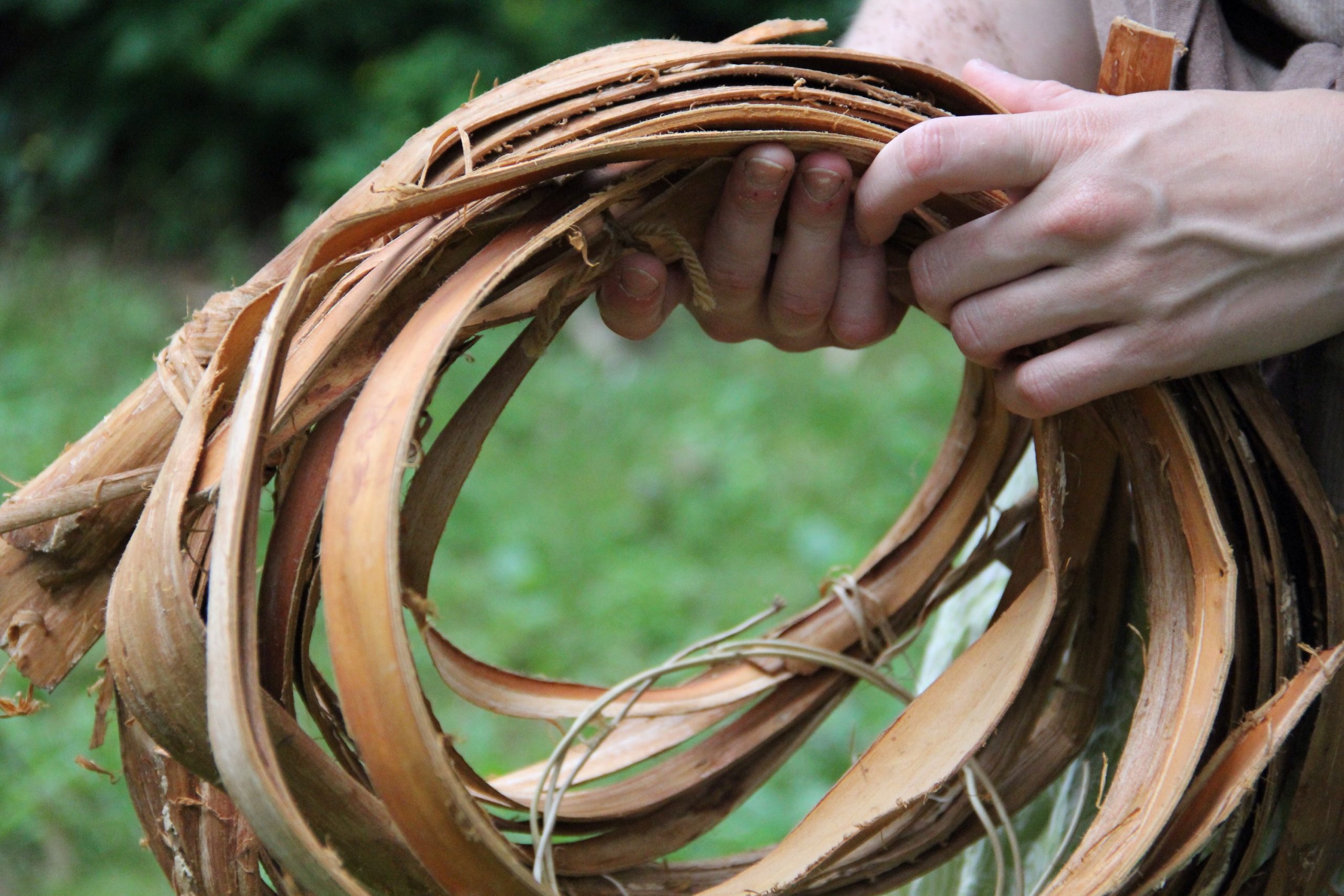 This summer was my first working with trees for basketry. I set out to try several different species and learn what I could about selecting trees, removing the outer bark, stripping the inner bark, and preparing it for weaving. Overall it was a success and I ended up with a lot of material that I am looking forward to using! I am recording my observations about the process here to hopefully help aspiring basket makers and so that in the future I can reference it. Enjoy and please share your experiences in the comments!

I live in the Hudson Valley in New York surrounded by mostly mixed hardwood forests containing a large variety of tree species. I’ve done a lot of reading on the subject so I knew I was looking out for several species in particular, including Basswood, Tulip Poplar, Elm, Hickory, Red Maple, Elm, Hemlock, White Pine, Black and White Ash, and possibly some others I am forgetting. Now as you may know my boyfriend has a tree service so I have a great source for trees that are going to be cut down anyway. Giving him a list of trees I was interested in was the best shopping list I’ve ever written! In the end I ended up with White Ash, Basswood, Elm, and Tulip Tree. All trees were being removed due to being dangerous, due to overcrowding, or because they were hanging over the house, etc. It is crucial for anyone harvesting trees to make sure you leave the forest healthier then you found it. So here are my results and observations!

This one was a real treat because it presented to opportunity to harvest two products: the inner bark and pounded ash splints. Several trees were growing very close to a barn and had to be removed. They were not the straightest trunks, but I got at least 4 five foot sections to try out. I did a lot of research and could not find any literature on the internet regarding using the inner bark of ashes for basketry, but I knew it was worth a try anyway. I removed the bark with my drawknife and then took off the inner bark. It was a beautiful color, strong, and flexible. Turned out to be great for basketry! I wonder if people usually just throw it away because the splints are more desirable. Well, I am using it and it is working wonderfully. I have a more detailed post about harvesting inner bark here. Next I embarked on the journey of pounding ash splints. Once again it took a lot of digging around online to find that people say that white ash is acceptable for making splints, but not as good as black ash. Well, I use what I can get so I pounded away (which is really hard work) and ended up with quite a few splints which seem completely useable. The verdict: White Ash is an excellent tree providing two products that are lovely. While it may not be as desirable as Black Ash it is certainly more common and should be enjoyed. Next I am curious about Green Ash… 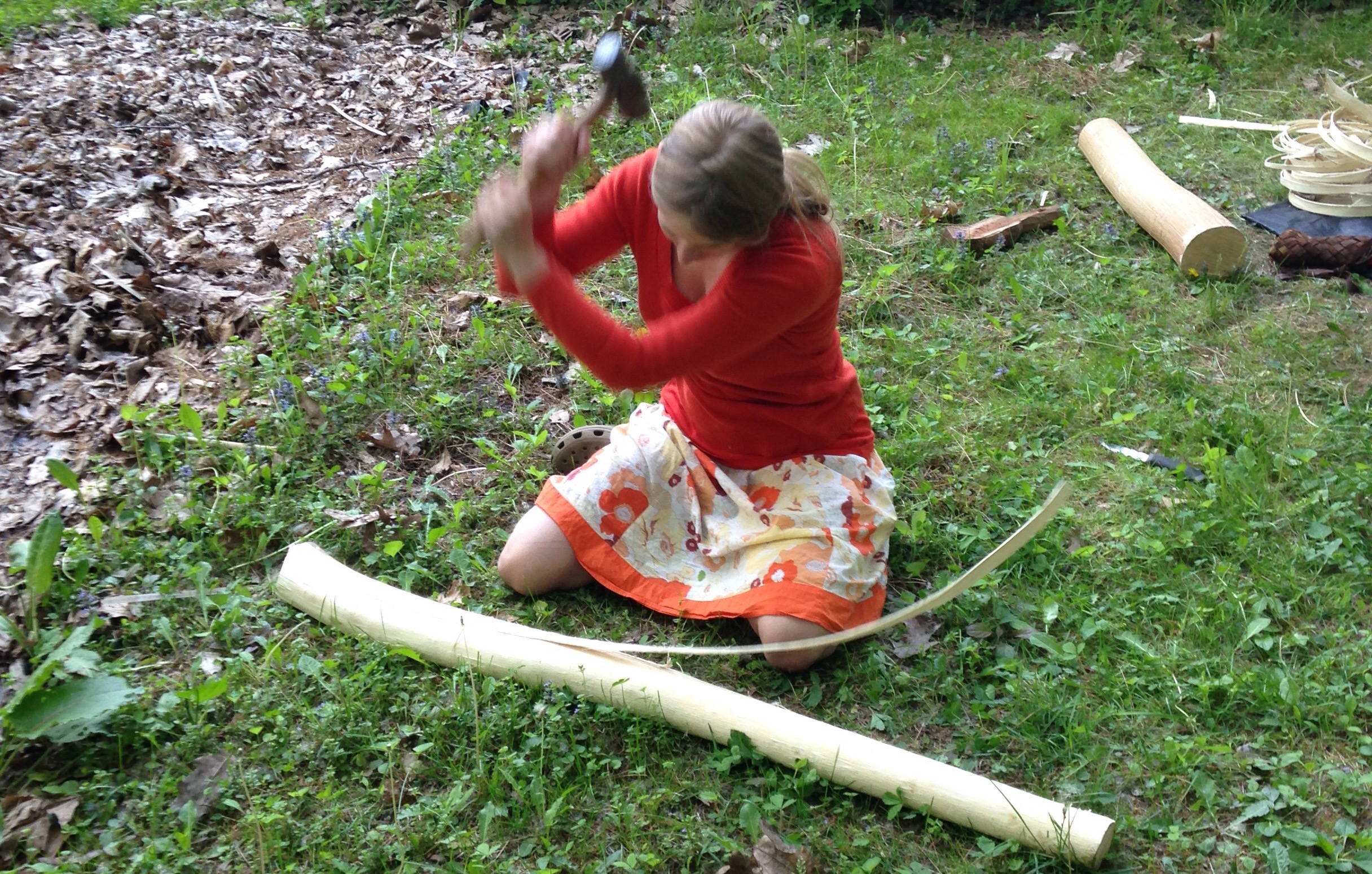 This one I was really thankful to have been able to use. It was the one I was most interested in finding this season. A 9 inch diameter basswood was growing right up against another, causing damage to it, so we thinned this one to allow the other to thrive. I was especially interested in Basswood because I wanted to experiment with making cordage as well as harvesting the inner bark. Both were great successes. I got a long section for baskets, and a long section for cordage. Check out this post for more info about harvesting basswood bark for cordage and baskets. 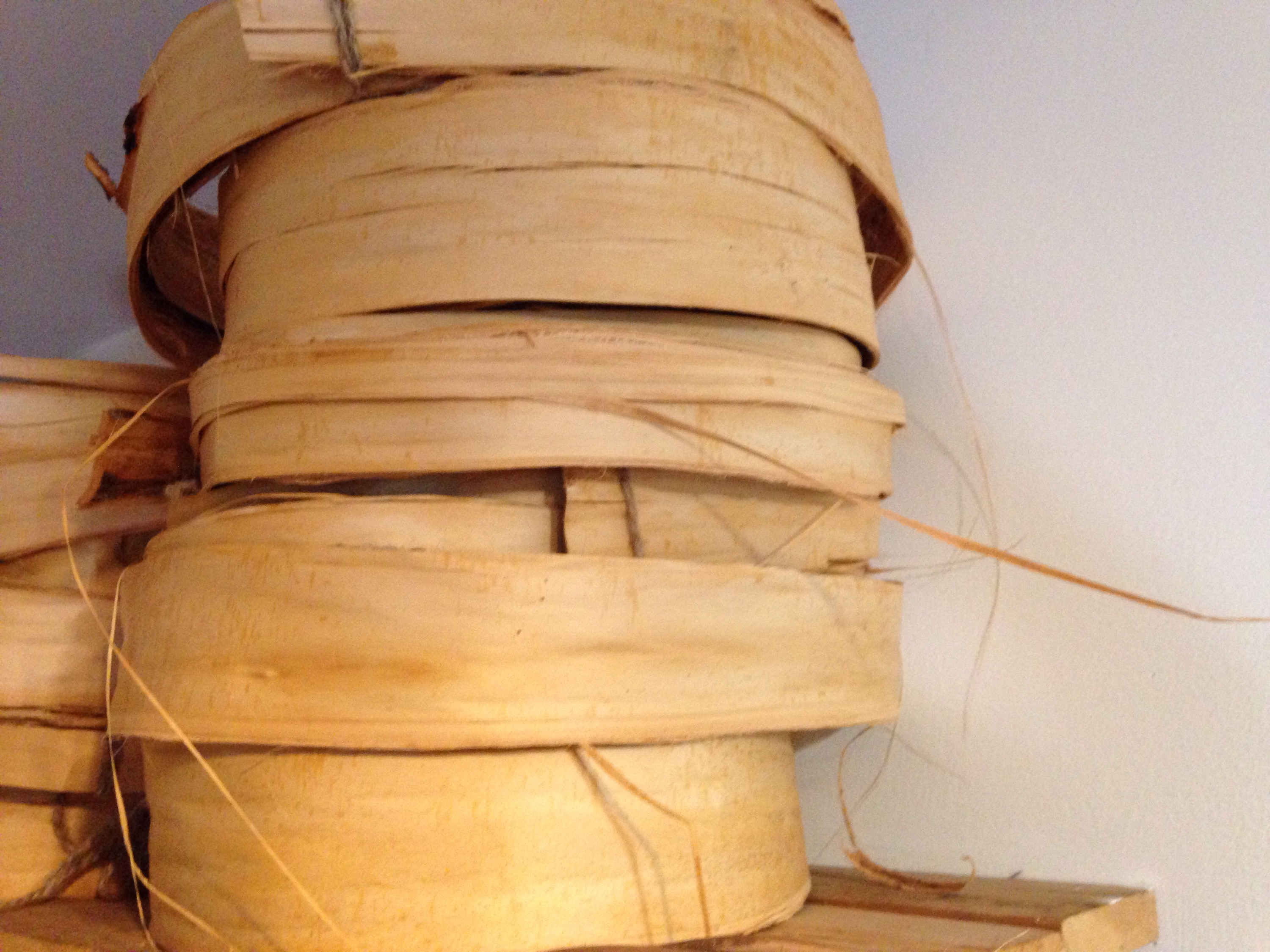 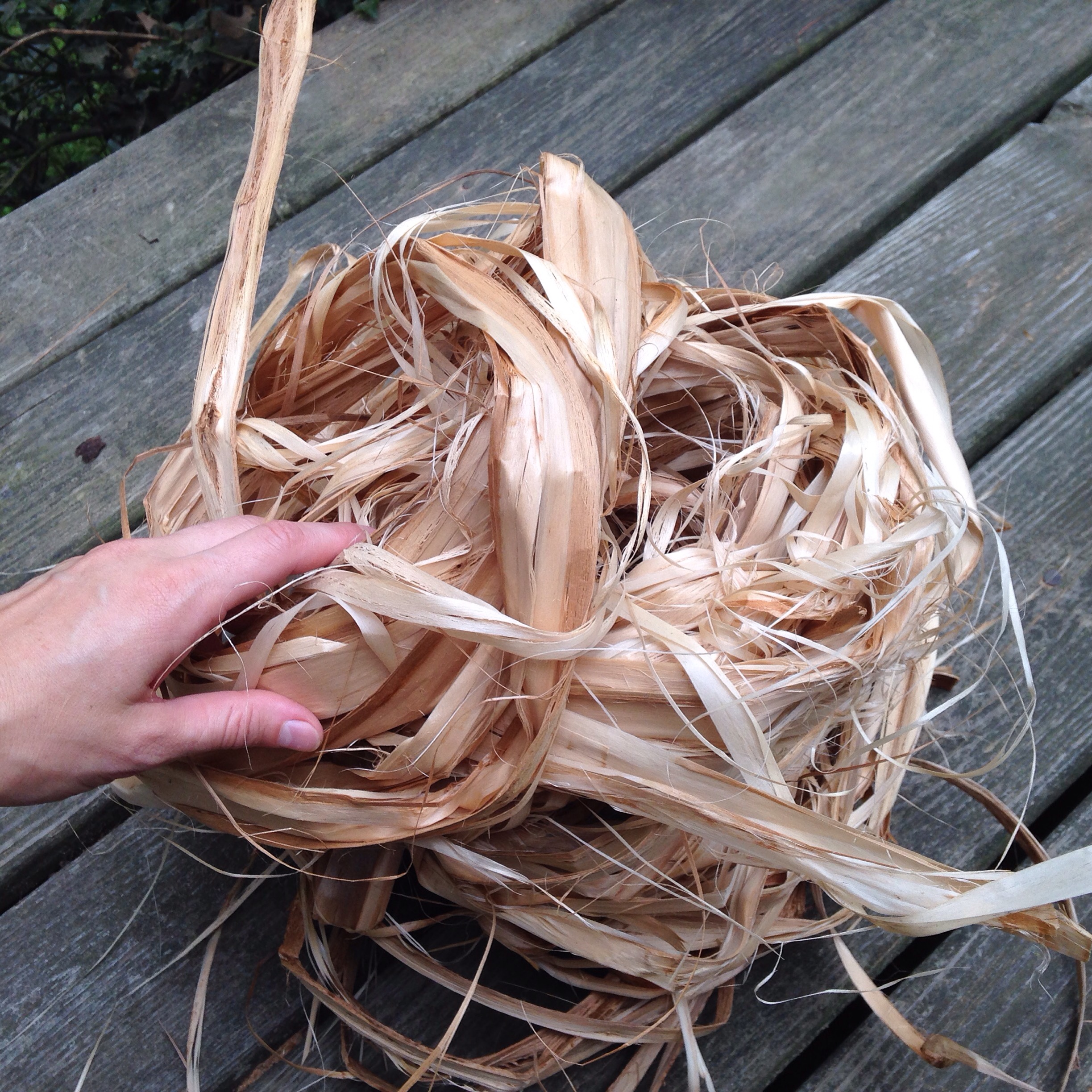 My good friend recently moved to neglected homestead and in the process of bringing the land to a productive place again needed to thin several trees from an oveIrgrown yard to allow sunlight for a garden. Luckily for me the majority of the trees were 8 – 10 inch diameter elms. I harvested several 6 foot sections and brought them home to work on. I found the elm bark to be particularly difficult to remove with the drawknife in comparison to the others. 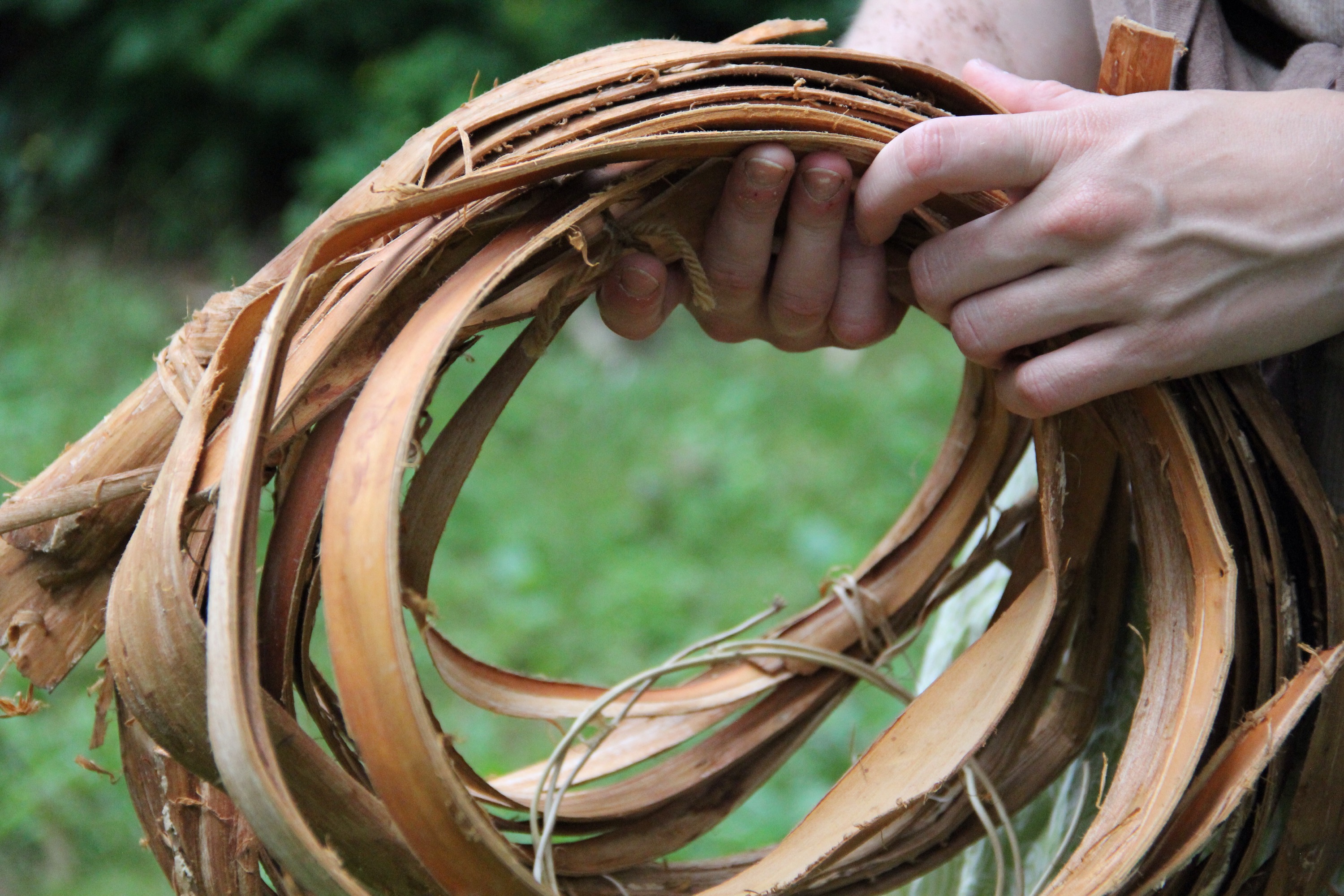 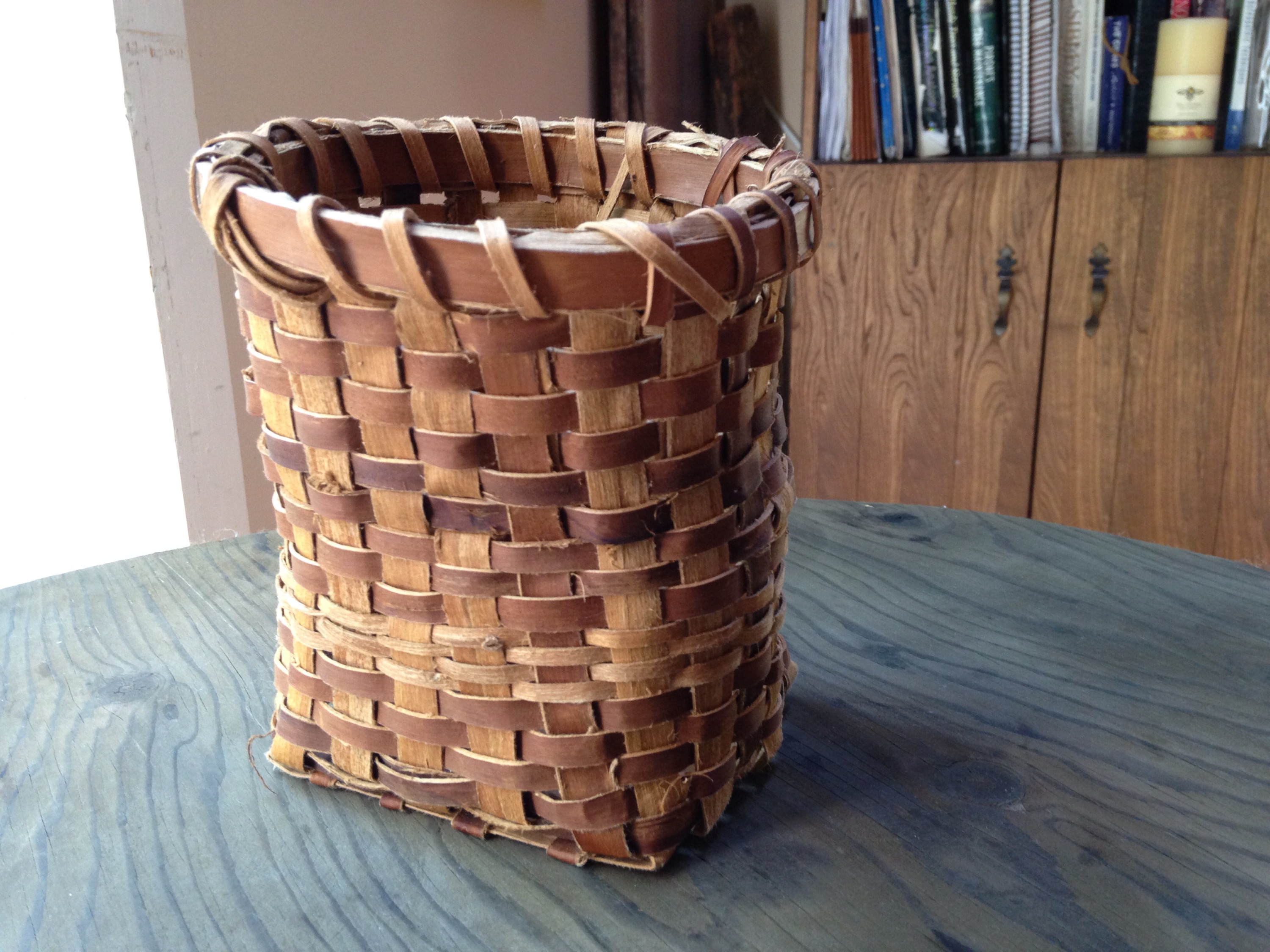 My last tree harvest of the season, this one was a larger tree hanging out a play area in a children’s camp that my boyfriend was hired to remove. It was much bigger than the others– at least 15 inches in diameter or more and 12 feet long. I had to harvest on site since there was no way to move it. Luckily my wonderful man propped it up on some logs so it was elevated a little bit. The outer bark was much easier to remove with the drawknife compared especially to the elm. It just came right off and since the tree was so big the inner bark was half an inch thick at some parts. It was challenging to roll the log over to expose new bark as I went due to it’s large size. I managed to do it by myself though and got some huge rolls of material. I haven’t used it to weave yet and am wondering if it will be too stiff. However the tree was not very old despite being so big so that is in my favor. 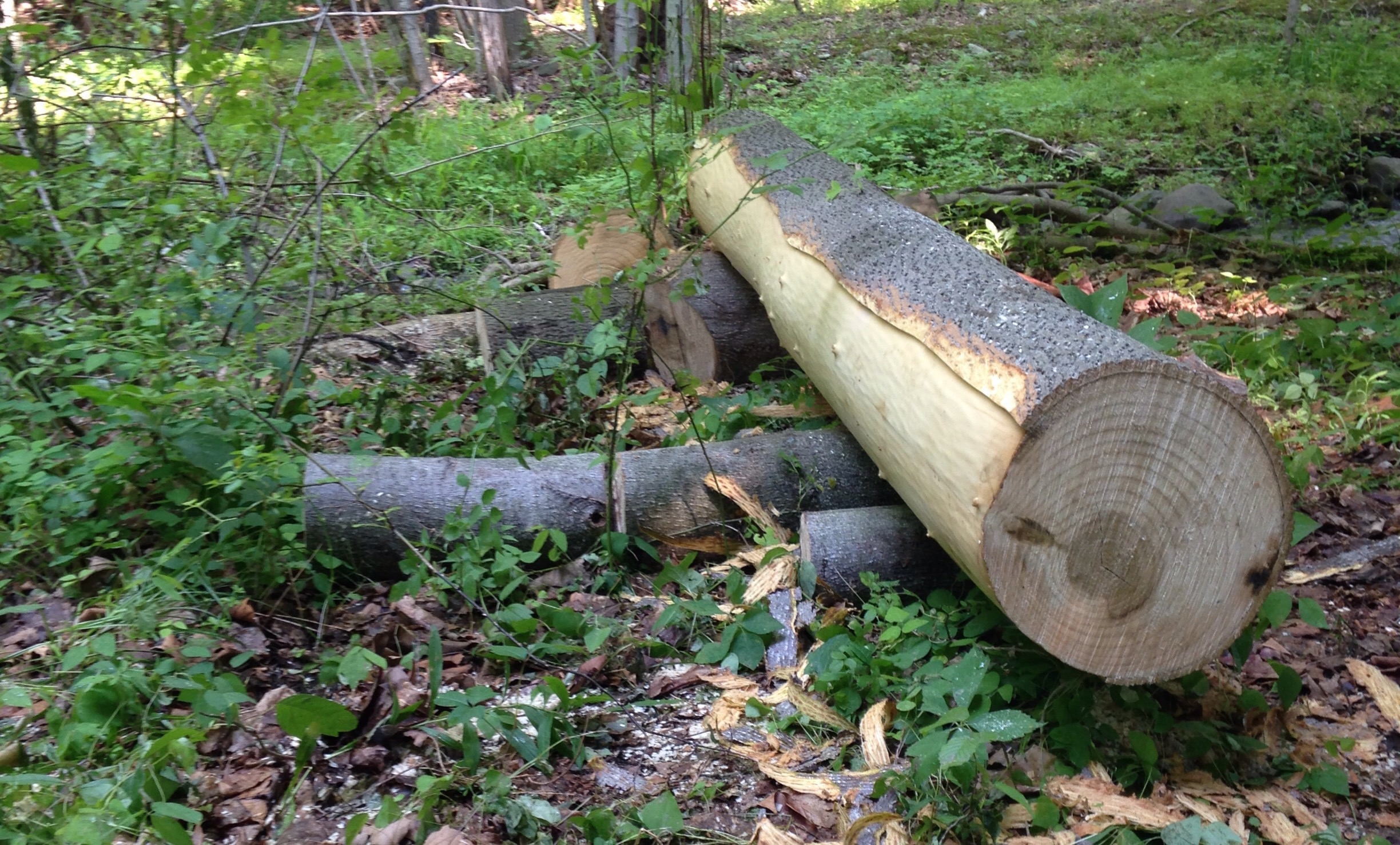 Elm bark was the hardest to remove

Tulip Poplar was the easiest bark to remove

A tree doesn’t have to be perfectly 8 inches in diameter and totally straight for 20 feet to be used for basketry. Yes, that is the ideal and if you are harvesting a tree just for basketry then definitely pick the perfect one. But because I was using trees that were destined to be firewood it was totally fine to not have perfect. I still got plenty of material to weave with and learned a ton in the process : )

I teach workshops at many different venues throughout the year, but there is something special…

Twining and Coiling at the NYS Sheep and Wool Festival

A sample of baskets made at my 2015 NYS Sheep and Wool Festival workshops. Coiling with Cattails, Grasses, and Daylily Leaves and Twining with Nature
This Post Has 5 Comments