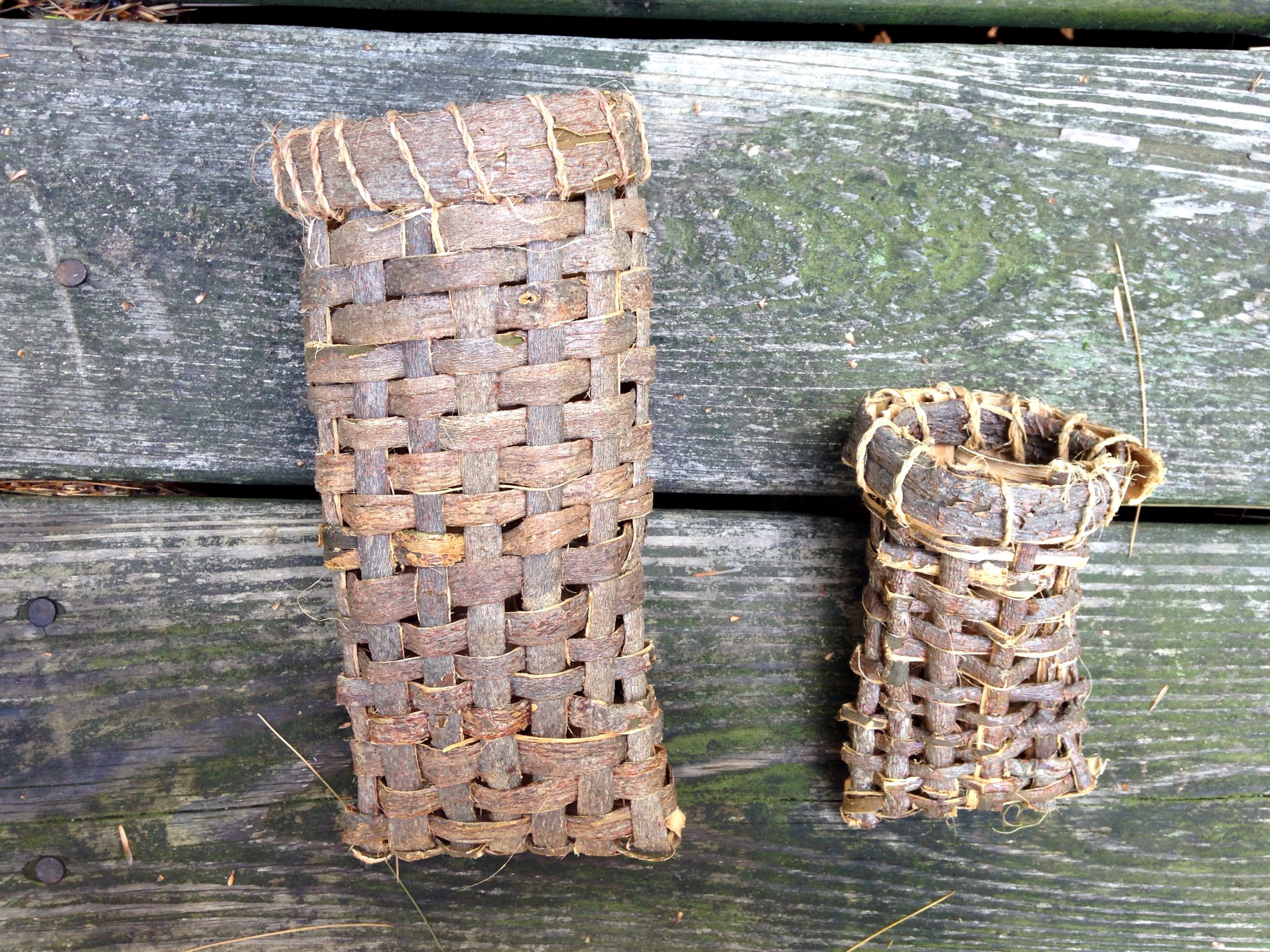 Having a boyfriend who makes his living as a tree climber definitely has it’s perks. Dave co-owns a small business that focuses on permaculture and conscientious tree care called Back to the Land in the Hudson Valley of New York where we live. (Check them out, they are awesome).  I often end up helping him out on jobs and find myself surrounded by beautiful and useful materials from trees that need to be pruned or cut down. So the other day when I accompanied him to prune some branches from a huge, gorgeous Linden (also known as Basswood).  I didn’t have much experience working with bark so it was really an experiment to figure out how to use it. While Dave was working hard in the tree I played around with finding branches and seeing if I could remove the bark. This is by no means a comprehensive post about using Basswood as a material, but I still want to share what I learned. Here’s how it went:

I found that long, straight branches with no knots worked best. The ones I used were about 1-3 inches in diameter. I have a feeling that the inner bark from the bigger diameter logs would be fine for cordage too, but I am not sure the best method for getting at it. (After getting home I did some research and found that some sources recommend using branches of basswood that have been dead for about a week to be able to remove the bark more easily. However, I had no problem with these freshly cut branches. Anything dead longer than a week would be too dried out.)

Removing the bark from the branch

The bark consists of two parts: the thin outer surface layer of gray outer bark and the thicker layer of inner bark. It’s the inner bark that is used for cordage. I found that if I scored just a little bit on the edge of the branch in a couple places and then peeled that strips of bark separated from the branch incredibly easily. It was like peeling a banana! (Unfortunately I was too enthralled to take photos of the banana peel bark removal so you’ll just have to see for yourself.)  I peeled the bark off a bunch of branches. At this point the bark is able to be used to make baskets. It can be used fresh, but will shrink a little so it’s best to let it dry for a little while and then re-soak it to restore flexibility. I decided to make a little basket right away.  There’s nothing like hanging out outside making a basket from freshly harvested materials! The bark needs further processing to make it suitable for cordage… 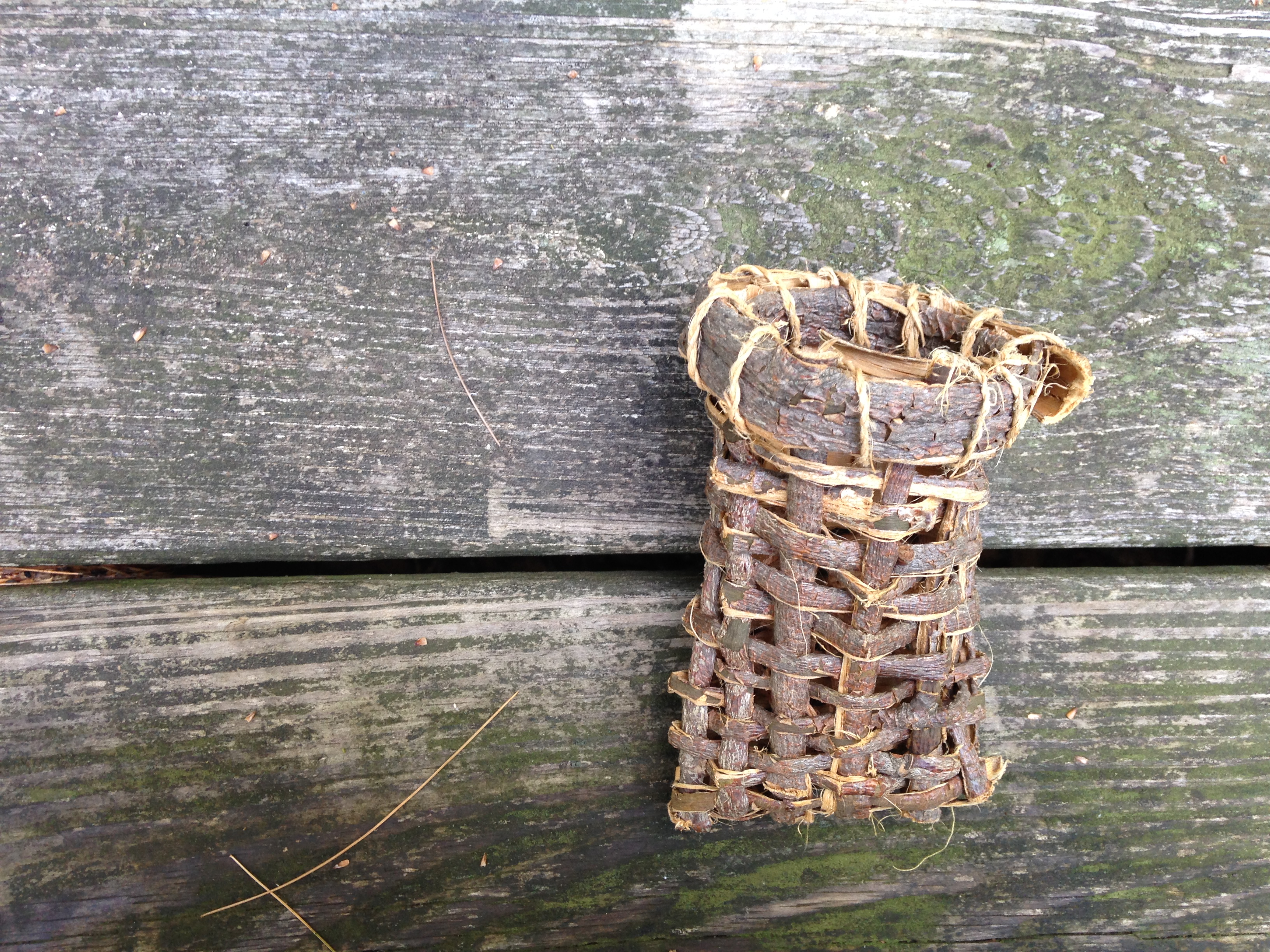 Processing the bark by retting

I decided to take the bark home and use a process called retting to solve that dilemma. In order to make inner bark of many trees usable for cordage you have to let it soak, or ret, (inner and outer bark combined) in water for a couple weeks. All the cellulose dissolves and the then gray outer bark becomes loose and pulls off easily, leaving the thin, strong, separated strands that are perfect for making cordage. I took my lovely lengths of bark home (they were anywhere from 3-5 feet in length) home. I set aside a couple pieces for making into another bark basket and then put the rest of it in a bucket of water which I let sit for about 3 weeks total. I changed out the water once or twice and it eventually started to smell pretty bad. After 3 weeks I found some parts of the bark had been sticking out of the water and hadn’t retted enough so I had to leave it in another week, making sure that all parts were completely covered in water. 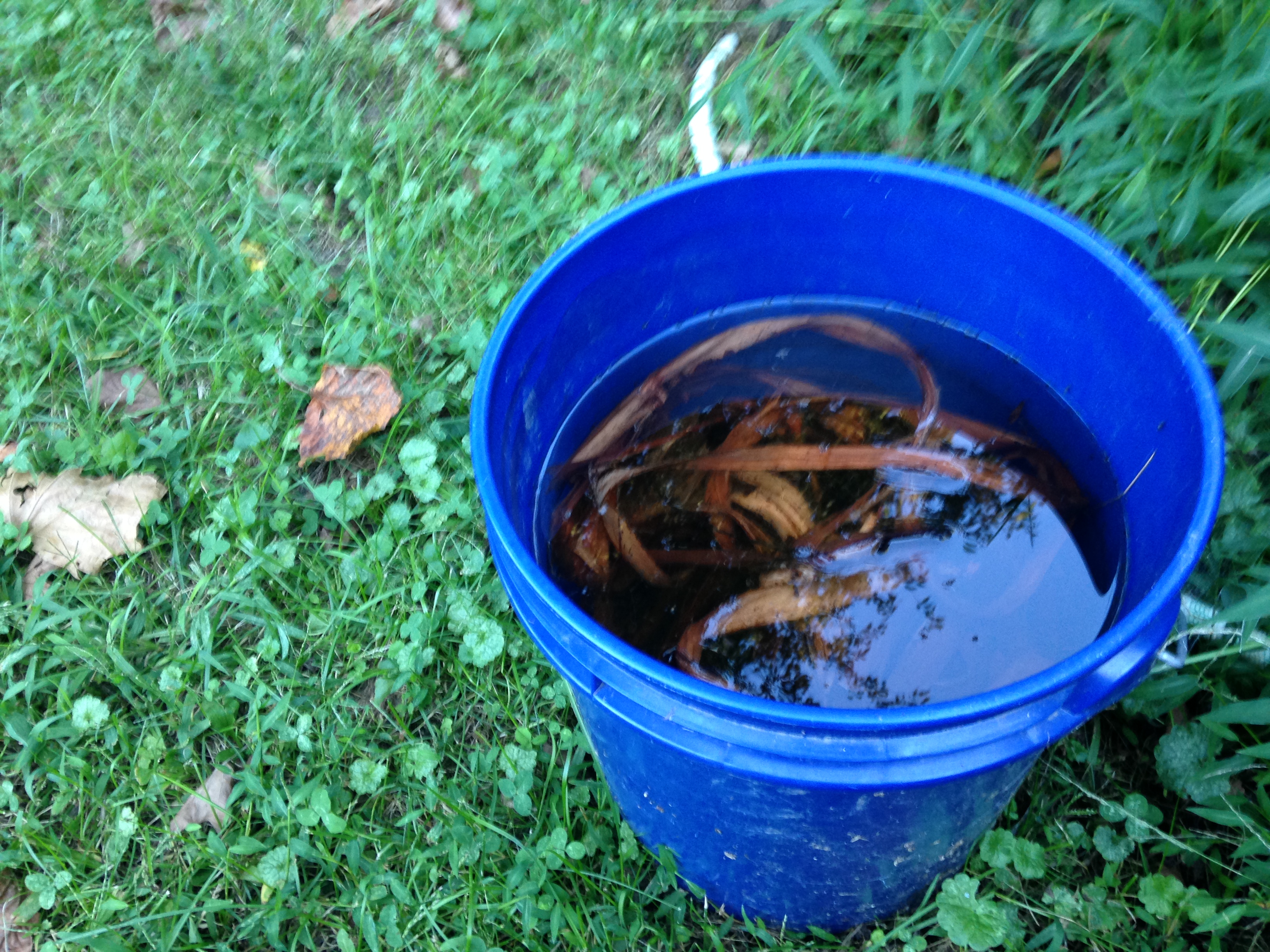 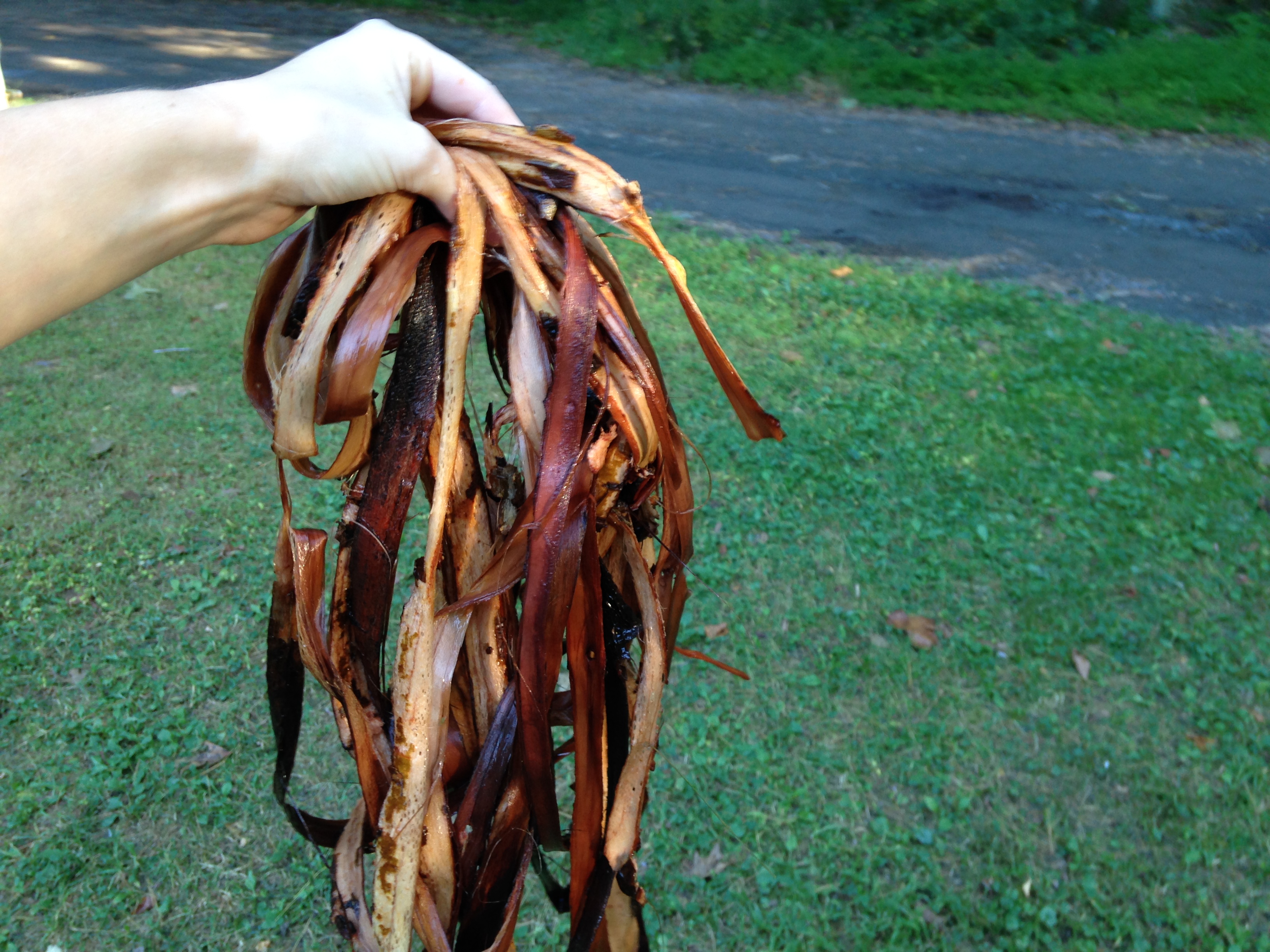 Once I removed the bark from the water it stunk, but it was an earthy smell that didn’t bother me. First I rinsed it really well and separated the outer gray bark from the inner bark. It slipped off pretty easily. Then I took each piece and holding it under running water from the sink I mashed it up and distressed it for a while, letting the sticky cellulose wash away and leaving the strong basswood fibers. The smell dissipated and I was left with pretty colored lengths of fiber, just waiting to be made into cordage. I let it dry thoroughly and if a piece seems like it needs more rinsing later then I can go back and do it. 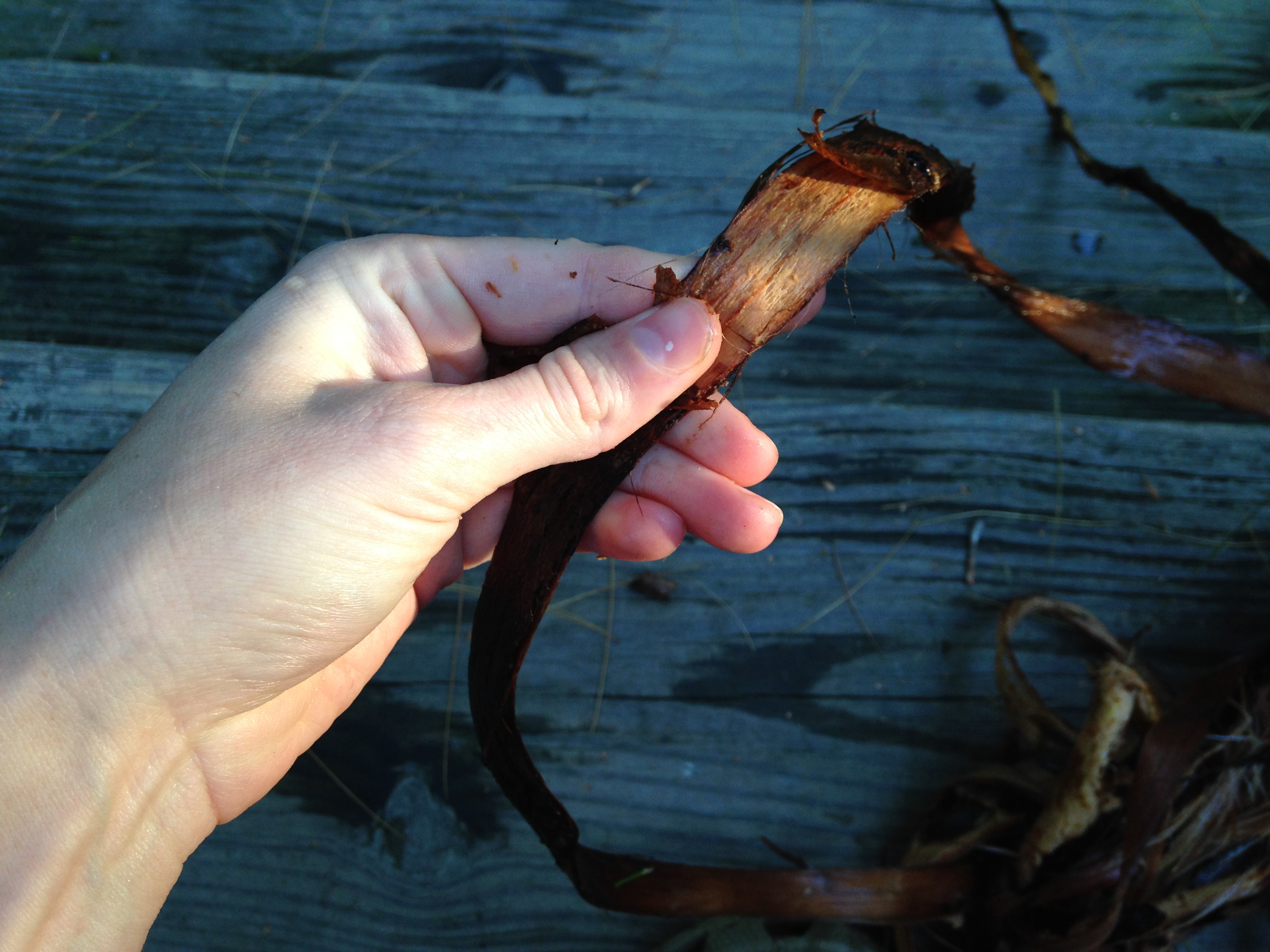 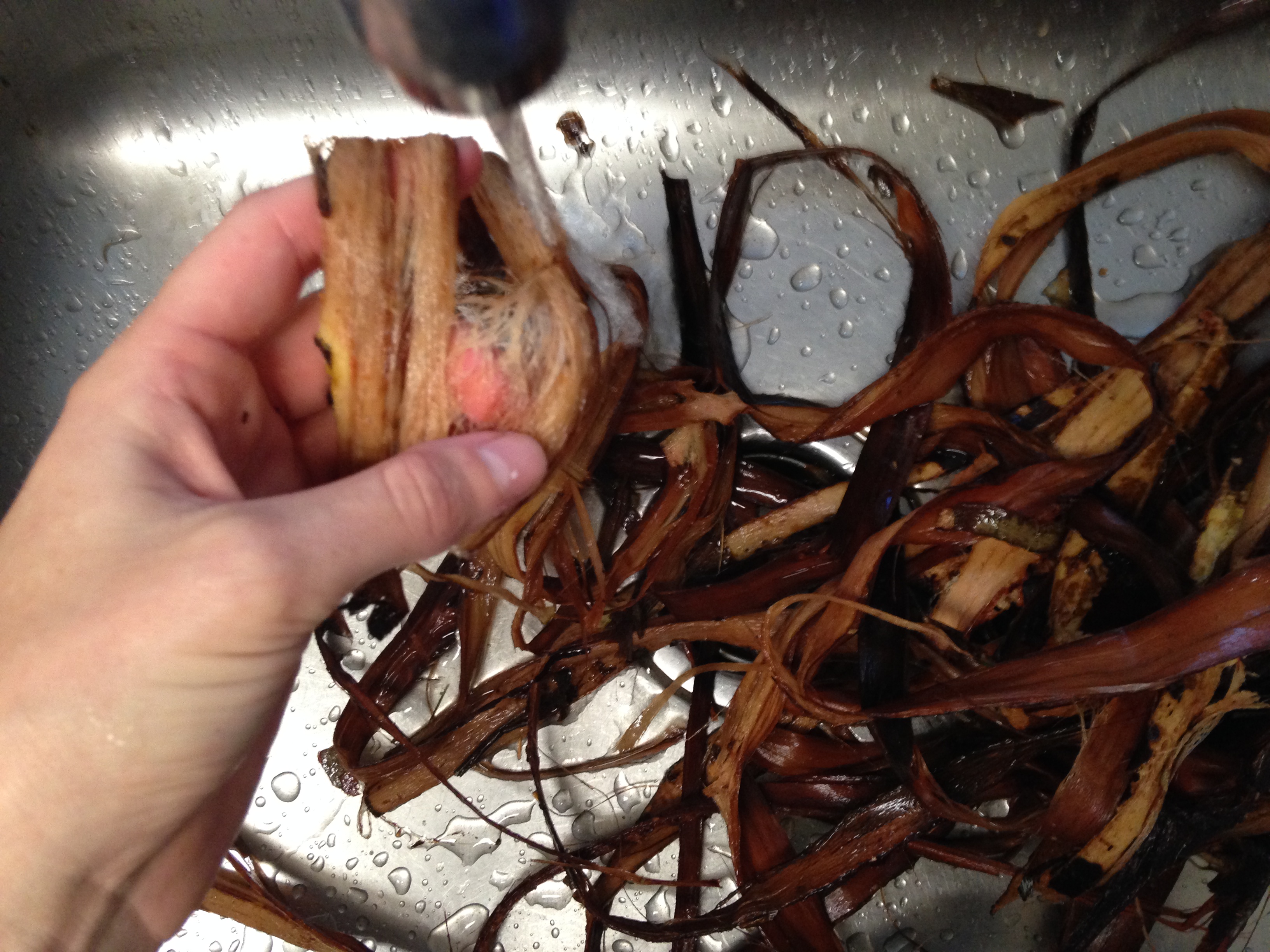 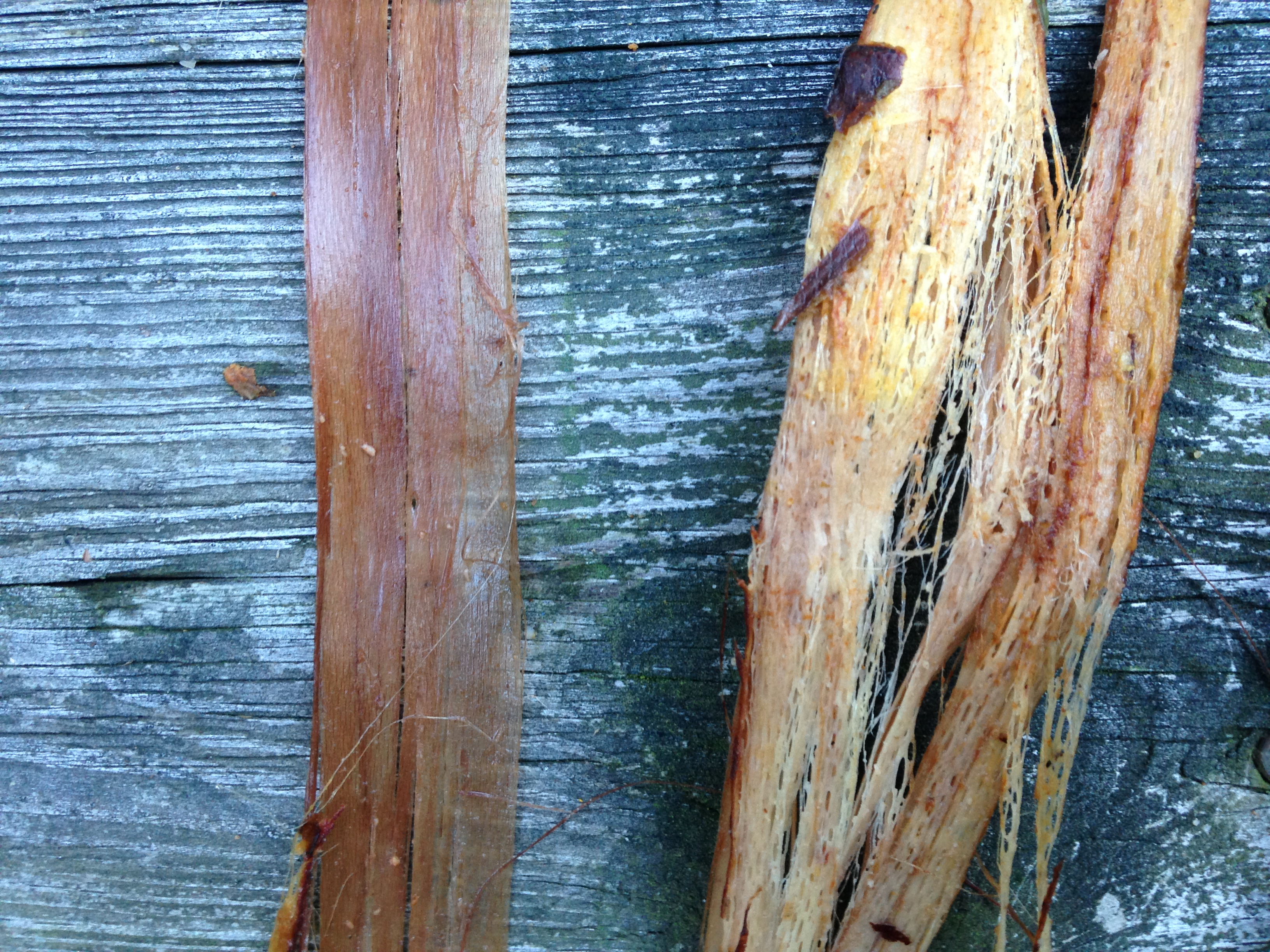 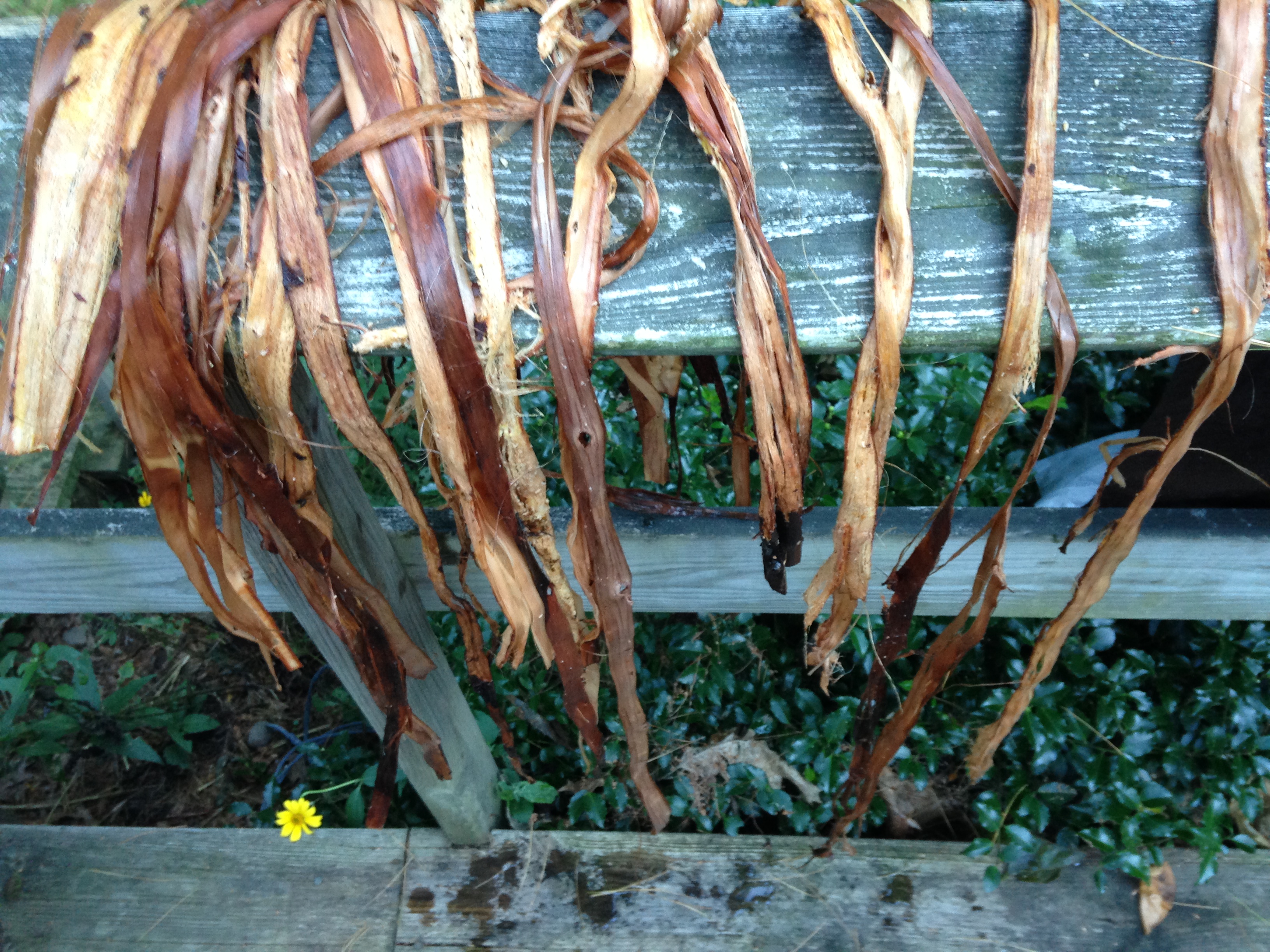 I ended up with quite a bit of basswood fibers. The outermost strands are this beautiful reddish color and the innermost strands are a light blonde. They’re really strong and very easy to work with. I’ve been having so much fun that I’ve been carrying them with me everywhere in my little woven pouch so that I can work on it here and there and hopefully end up with enough cordage to make a twined bag someday! It’ll take a while, but I have patience. 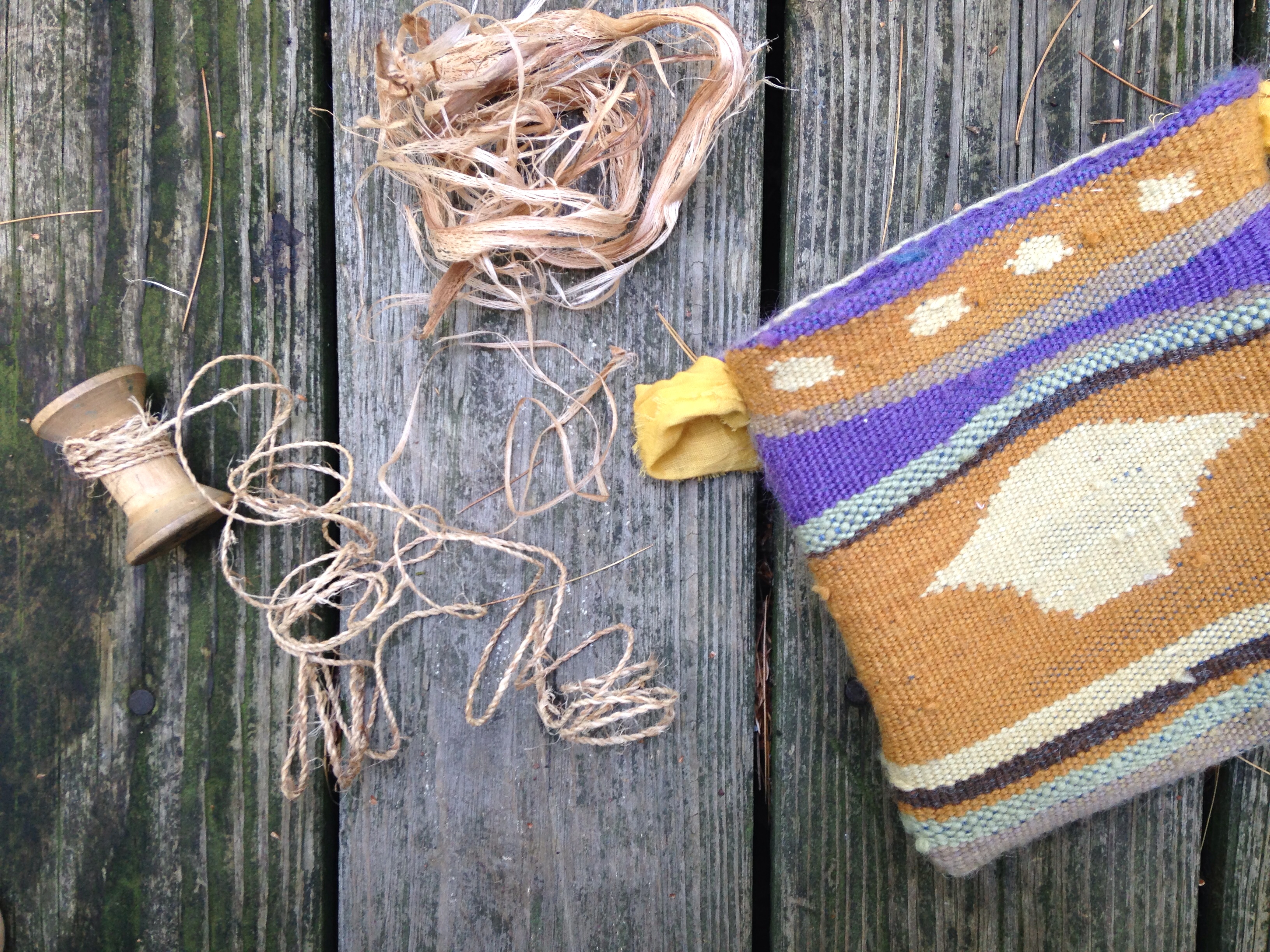 There are plenty of great resources on making cordage out there so I won’t get into it right now. Instead, here are some links to sites that go over it. This one, from Jon’s Bushcraft, is my favorite. This one has the basics as well.

Next time I come across some Basswood bark I’ll also have to do a tutorial on how to make the woven pouch that I was playing around with. I used extremely fresh bark for the first one and it shrunk a little bit. The second one I made the next day with bark that had dried out a little, but was still pliable enough to use without rehydrating. It was wonderfully flexible material and this particular pouch is a pretty simple recipe and easy to learn. The key is to have the right materials and Basswood turned out to be perfect. Please leave me any comments you have about your own experiences with basswood fiber and keep a look out for more posts about Basswood in the future. It’s one of my favorite trees and I am looking forward to sharing more. : ) 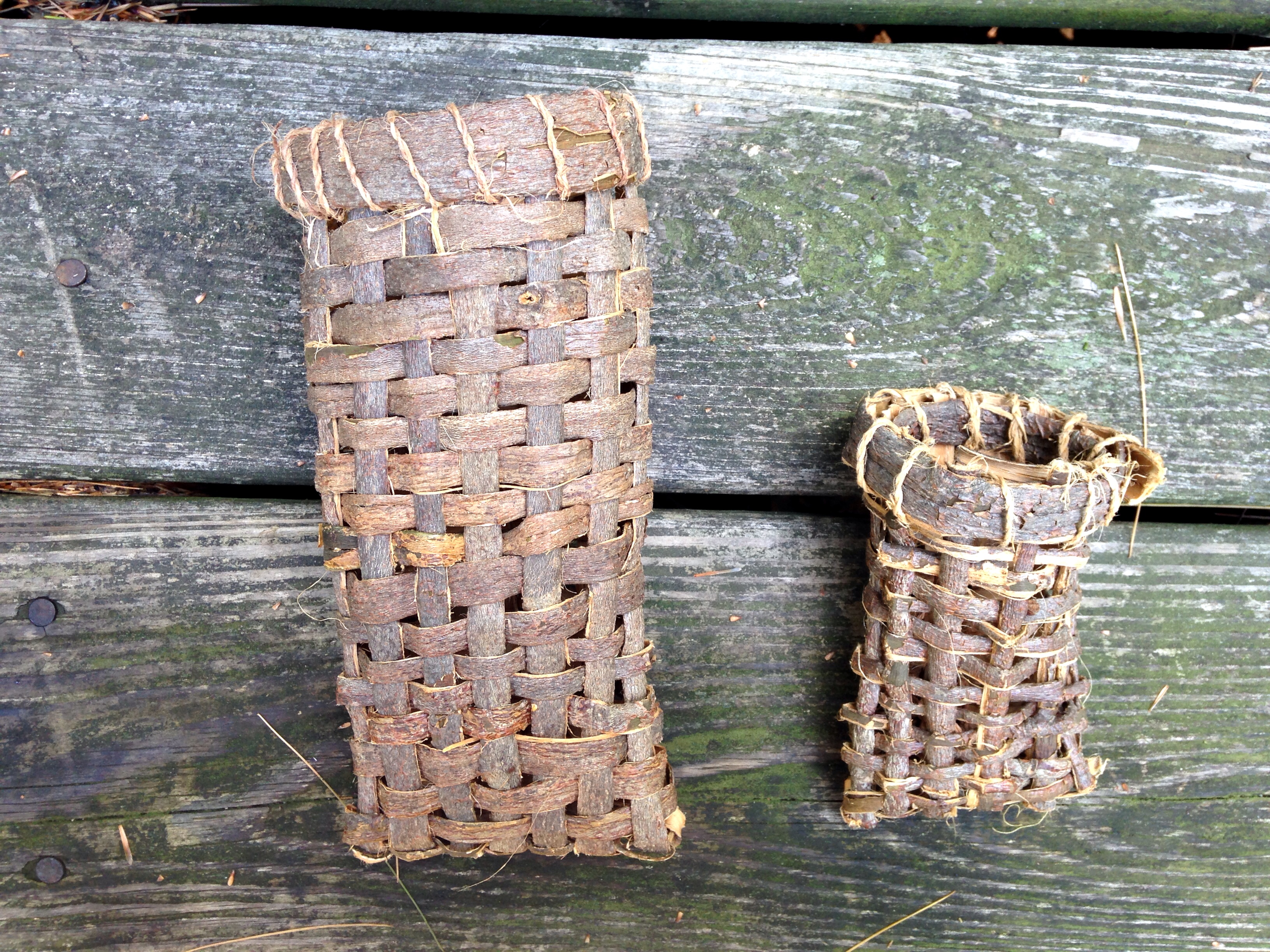 Plant Dye Recipe and Tutorial: How to Make a Jewelweed Dye

How to make a plant dye with jewelweed in an easy to follow natural dye tutorial.

A Successful and Sunny Day of Natural Dyes and Community Fun!

So the Rondout Valley Common Ground Celebration was an amazing success! After a tense early morning of…

All About Pine Needle Baskets

Why I love Coiled BasketsA new basketry workshop is on the calendar! I am so…