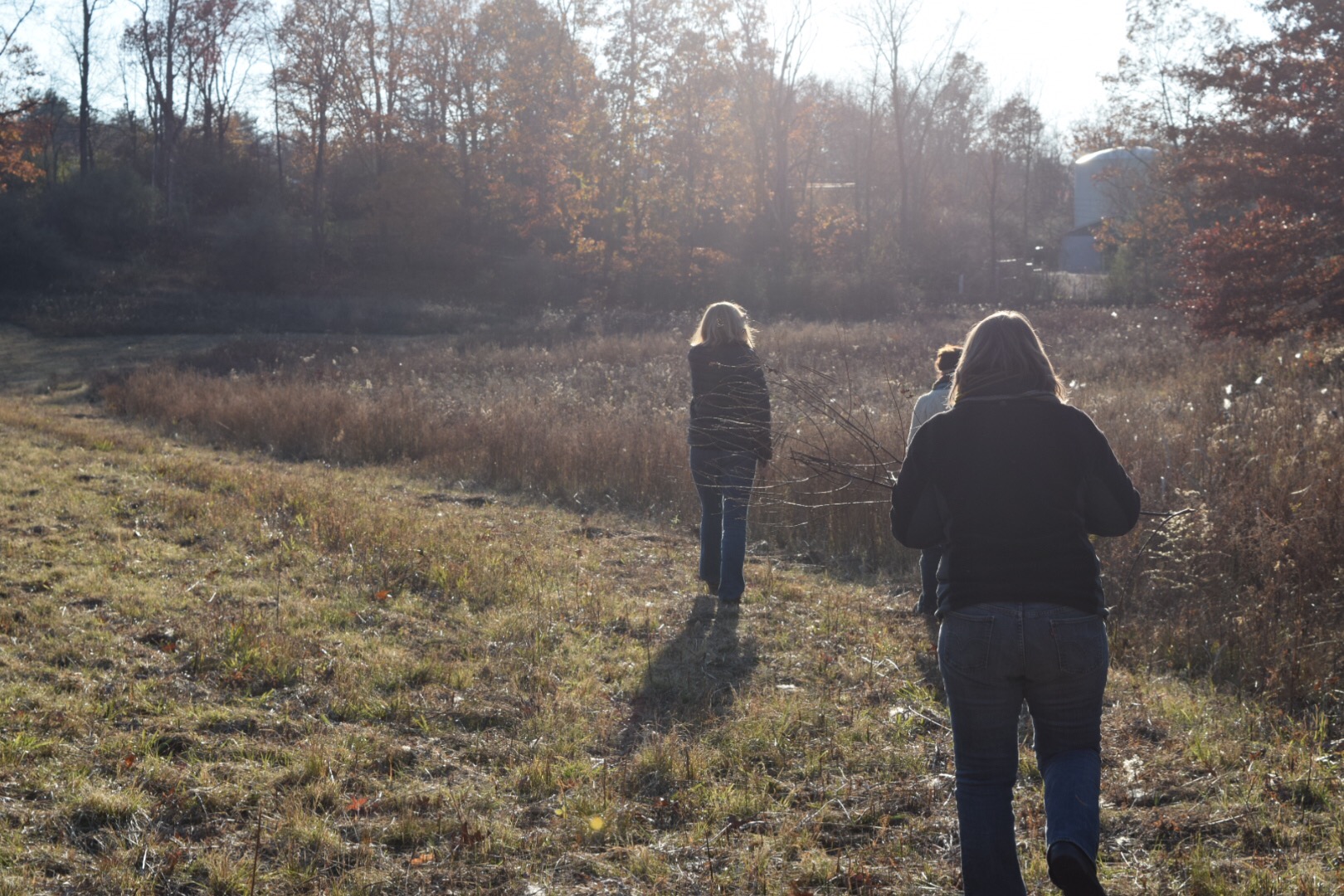 I love the seasonality of what I do.

Working so closely with the plants in my landscape I am constantly paying attention and watching which plants are in season for harvesting and which are about to be ready. As the year passes I get to know the landscape in the most intimate way. Winter is the time for some plants and spring for others. There is always something to look forward to and always something that has just come to completion until next year. The other day as I was laying in a field of dogbane and red osier, thinking about this beautiful idea of seasonality I got the idea to publish a post series about each month in the life of a basket maker. Since I’m thinking of it now in November this will be the first month and hopefully I’ll continue it until next year! In it you’ll find what I’m harvesting, what materials I am processing, and just generally what I am up to as a basket maker and artist during this particular month. Of course it will be somewhat specific to the mixed forests where I live, in Central New York state, but hopefully there will be something for anyone to enjoy…

The Story of November and Dogbane

November is a time of fields. Muted yellows, green grays, and a burst of bright sienna as you spot stalks of red osier amongst the nodding dead stalks of ragweed and goldenrod. A time when the leaves of the plants are delicate, withered and crispy. The sound of your feet walking through the field will be crunchy. Northern Harriers may fly overhead in the blue sky. It’s a time of detail; look closely at the head of the thistle, the crumpled leaves of asters, and the long black seedpods of dogbane and a world of intricate beautiful will reveal itself to you. It’s a time of long nights and cold temperatures setting in. Don’t worry though, a warm day will present itself and you’ll find yourself out in that field with the sun streaming through trees at the edge as the long afternoon blue sky gives way to an autumn sunset. You may even find yourself lying down during the harvest to listen to the gentle wind and watch the way the light plays on the plants around you. 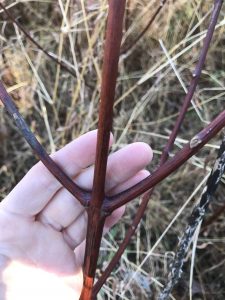 Now is the time to harvest Dogbane (Apocynum cannibinum). ‘Away, dog!’ it’s genus name says, a nod to the toxic alkaloids present inside. But don’t worry, all of the energy of the plant has gone down to the roots and only the dead stalk is left standing alone after it’s seed pods have fallen off. You don’t want to chew it, but the plant is nothing to be scared of. The last thing I want to do is go away when I see the deep red, almost brown, burnt umber stalks of dogbane in the field where it likes to grow! In fact I will always come closer, feel the smooth stalk, note the opposite branches, observe whether the long black pods have fallen, look down to see if a small animal has chewed at the base as they sometimes do. Because the species name ‘cannibinum’, hints at it’s wonderful purpose, not as a drug of course, but as a premier fiber producing species, on par with the hemp it is named after. It may be harder to process than hemp, but you just can’t beat the gorgeous soaked in sunset orange color of the fiber. Always cut it at the base and leave the rhizomes undamaged. And be sure to scatter the seeds, reminiscent of milkweed’s, on the wind, or leave the pods on the ground. 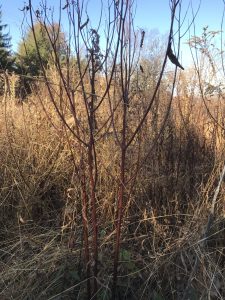 It’s the fibers you want, running long and strong underneath the thin papery layer of red outer bark and on top of the dry pithy interior. You’ll split it, peel sections of the pithy inside away in pieces, and somehow, somehow, get that persistent outer bark off. Some folks scrape it off before even splitting it. Some wait until after the fiber is off the pith and dry and then rub it between their hands as flakes fall away. What ever you do, it seems to take a long long time! That may be part of the lesson, but there also might be a secret out there… and it has to do with when you harvest.

Depending on the particular year’s temperature, amount of rainfall, and the location of the spot the dogbane may or may not be ready to give up it’s fiber easily. I am not privy to all its nuances and rules, but I know they are there. In reflection of this year’s harvest I will say “harvest in November, after a soaking rain, before the first real bitter cold stretch.” Not before the first or even fifth frost, but before it really really gets dry, deep cold for a few days. But I also like to say “neither dismiss or take for law anything I say until you’ve tried it out yourself.” So get out there and give it a try! And do yourself a favor and take notes. 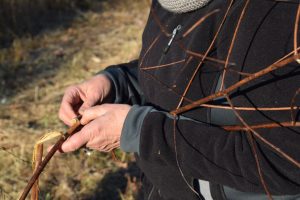 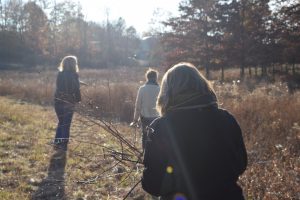 What else might you choose to harvest this time of year, whether in fields or forest? Red osier certainly is waving it’s long red arms, waiting for harvest. It’s a great time to use goldenrod, mugwort, ragweed stalks as sporadic weavers in willow baskets.  I don’t suspect the store and soak well, so I usually will just use them during this time of year. Milkweed stalks are almost past their times, but you can probably still find nettle retting on the stalk and ready to harvest. You can also turn your attention to the field edge in the forest and begin your vine harvest of the season. They will be in season for the entire winter, so there’s no hurry.

When I get back home to the studio my chief tasks will be processing the dogbane and sorting red osier into those to be used for ribs and stakes, and those that are long and flexible enough to be weavers. I’ll also sort the weavers by size so they will be ready for me to grab and soak to make a basket. I might also be coiling grapevine and bittersweet to store for later.

Other tasks of November include putting the outdoor part of my studio to rest. Dumping out water from dye pots, putting things away in the shed, and generally tidying up the yard. Anything soaking must be dumped out or it will remain in a block of ice for the rest of the winter. I may even find myself rinsing the last bit of Basswood and lamenting that I didn’t get to it when the temperatures were about 50°!

Next, I’ll settle in, snuggle up next to the fire and maybe even make a basket with all of the beautiful things that I’ve harvested. That and begin planning my workshop calendar for next year…

Harvest Throughout the Winter 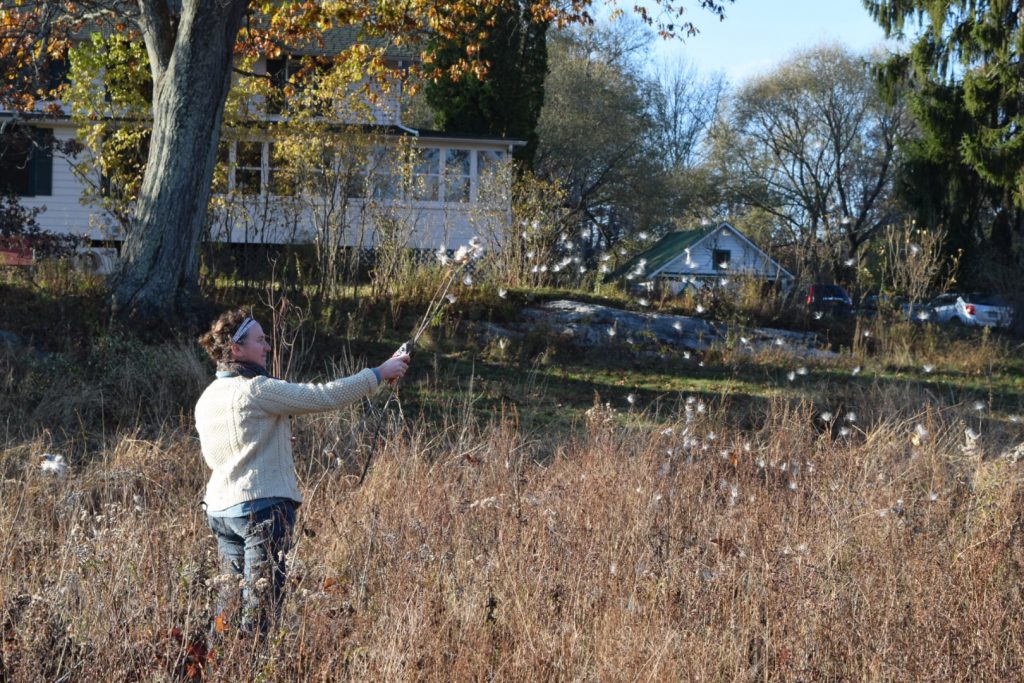 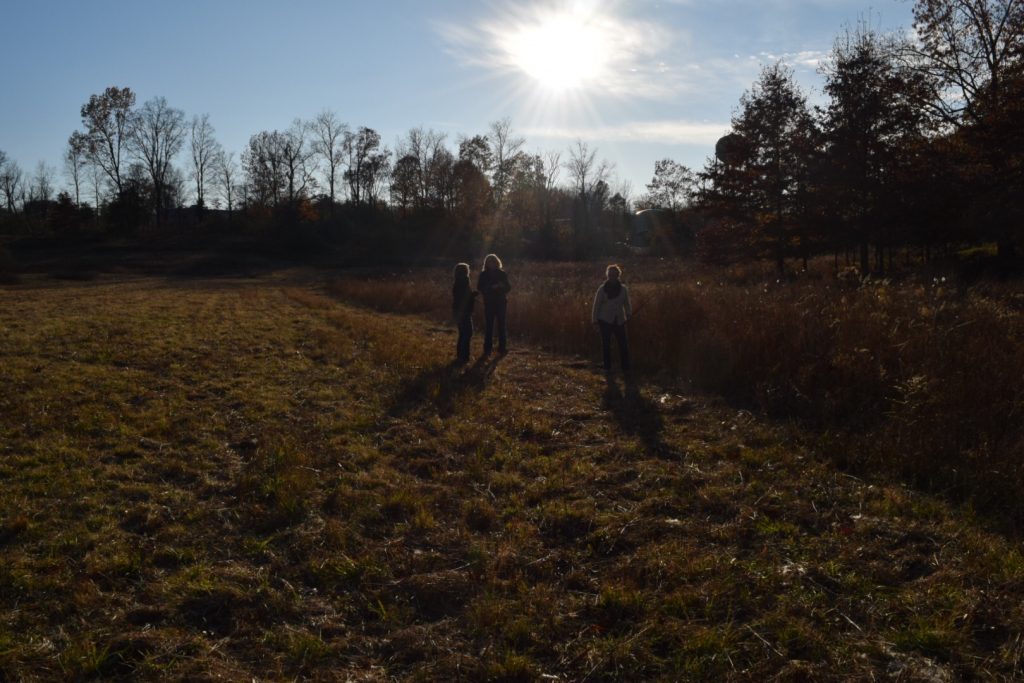 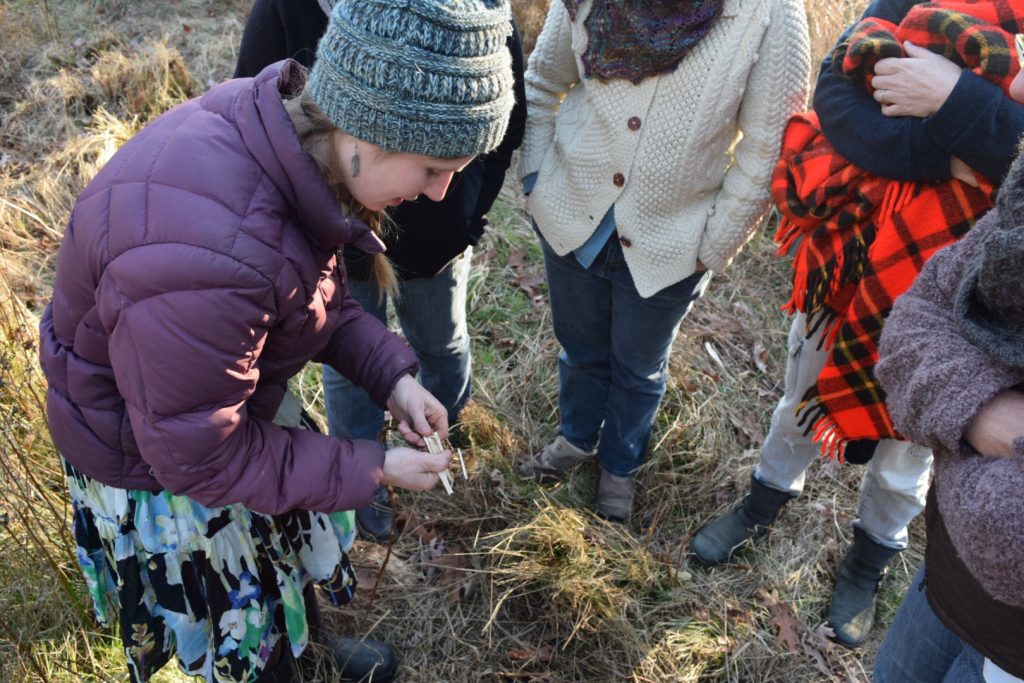 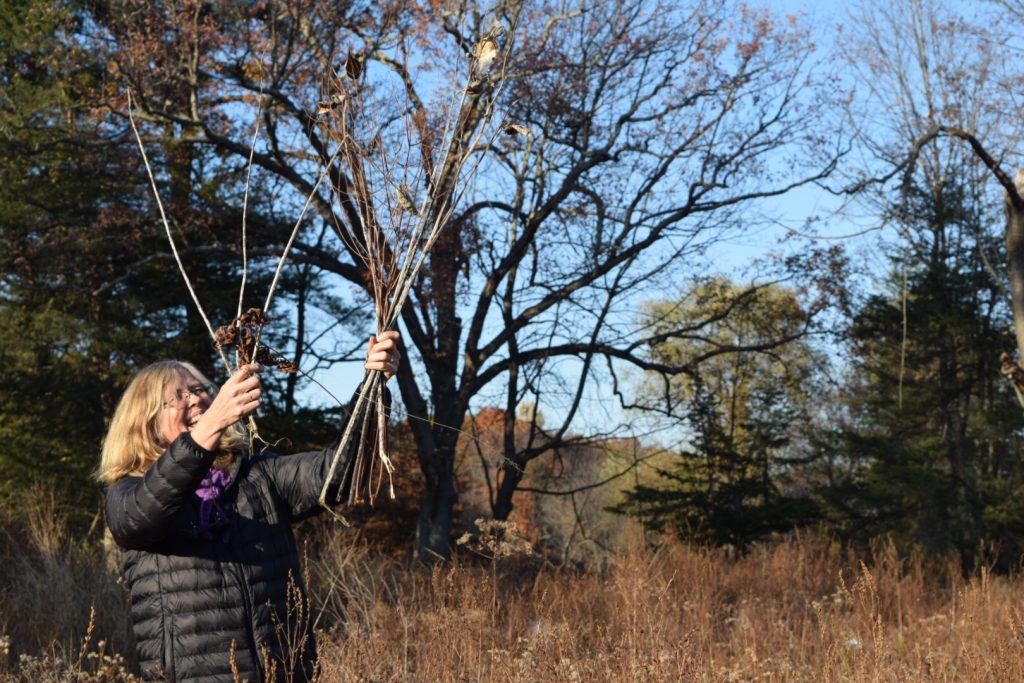 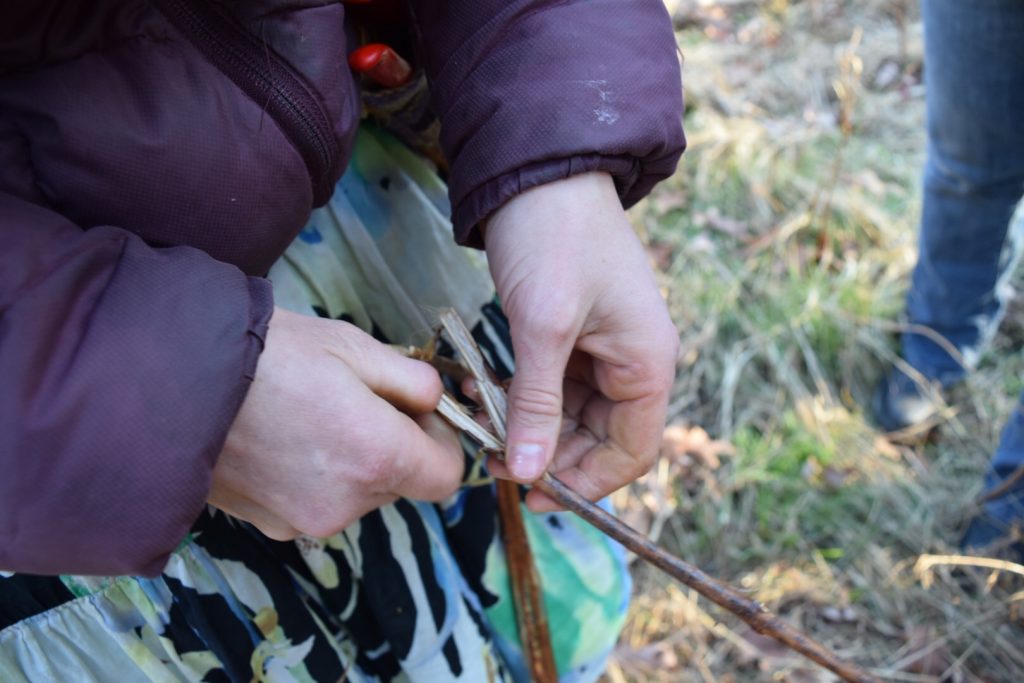 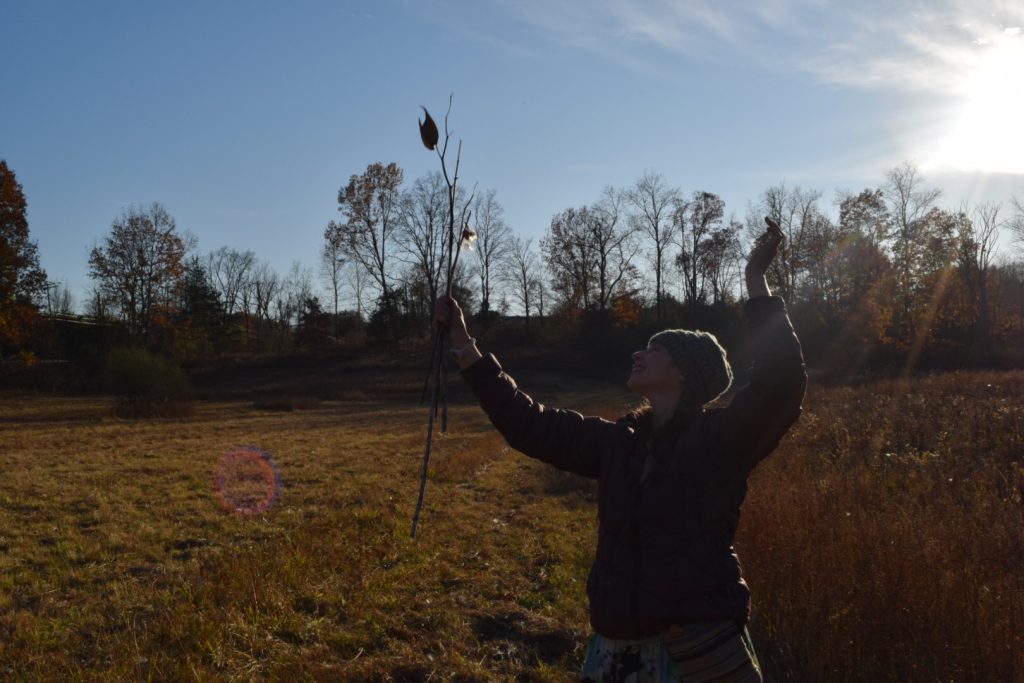 Last year I posted a recipe for making dye with Stinging Nettles. to check out that post…

In honor of this year's first annual Nettle Fest, being held at Lifebridge Foundation in…

This summer was my first working with trees for basketry. I set out to try…